Happy New Year!  But in this post, it’s time for Christmas Eve.  A beautiful placesetting thanks to our mom (we ordered the linens from williams sonoma–12 days of christmas was the theme) 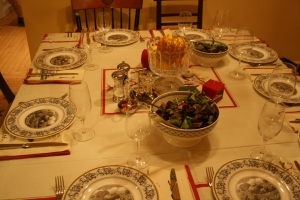 And a delicious dinner, courtesy of my mother in law:  the eggplant and chard lasagna from Deborah Madison’s Vegetarian Cooking for Everyone.  Too bad it’s such a time-intensive recipe (many of the Deborah Madison recipes are:  not necessarily hard but lots of steps)–it’s so delicious.  Everyone has probably had a vegetarian lasagna with eggplant, but here the interesting touch was combining it with chard.  Also, the eggplant was sliced thin and roasted before assemblly (did I say a lot of steps?)  rather than just being chopped up which is what I’m used to seeing.  It was absolutely wonderful.  The colors were appropriate for Christmas (and also for the Italian origins of lasagna):  red, green, and white: 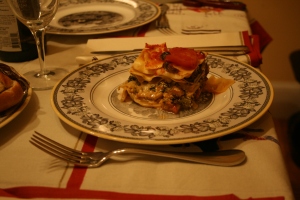 Possibly the best lasagna recipe out there (and I'm not a vegetarian).

Butchering a chicken–it really is getting easier thoguh I don’t know if I can do it in 5 minutes just yet.  I do hope to make it second nature as it saves money (in constrast to buying the pieces separately or all chopped up) plus you get the carcass for making soup stock.  I also saved the chicken livers separately–one of those organ meats that I know Americans aren’t big on (I can’t say that this particular American necessarily is either) but that all my French and Italian cookbooks have loads of recipes for.  We’ll see.

Cock a doodle doo! I'm using Mark Bittman's technique (whose book you can see in the background).

And finally for Santa:  Those navettes a la fleur d’oranger (orange flower water boats) from the Chocolate and Zucchini cookbook.  The best thing about making these was the perfume of the orange flower water as they baked.  It wasn’t an aroma you are used to in a kitchen–it was really like a perfume.  Especially in the middle of winter, it could really transport you:  the warmth of the oven combined with the scent of orange blossoms and you are in the mediterranean.  The cookies were OK, I liked them better right out of the oven when they were soft rather than once they had hardened (though you can apparently soften them right back up by popping them in the oven).  I may try them with rose flower water next time–don’t see why it shouldn’t work!